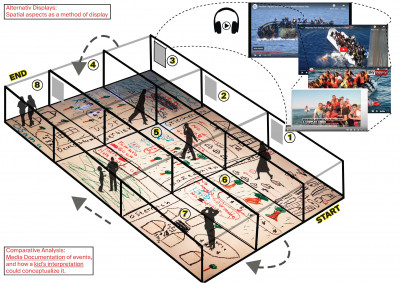 Working Question:
How Display components expand from antiquated methods to tangible sceneric experiences?
The following are analytical observations resulted after a field research in Das
Dokumentationszentrum Flucht, Vertreibung, Versöhnung, Berlin, Oct 2021.
According to the official statement of the center, the exhibition displays personal belongings
(announced as “original” objects), documents and photographs. The statement also
demonstrates the display as a “multifaceted” presentation.
The method of representation was formed through a categorical system, based on the
“purpose of use” of each item (transportation, financial aids, etc.) with neglection to
historical or geographical frames of reference. The exhibition backstage(s) (immigration
routes, causes, time and spatial dimensions) were faded through the unification process to
form the display podiums.
The objectification of the exhibits formulated inconsequential narratives for the viewer,
resulting in a visually oriented display, rather than a comprehensive informative narration,
which is a direct contradiction to the “Dokumentationszentrum” official objective: “The
center provides information about the causes, dimensions, and consequences of displacement,
expulsion and forced migration”. as the focal point was not the coherence of the Exhibits, but
the display itself.
As a case study, I selected an exhibited map of the flee road from Syria to Germany, from the
included visual language, the Exhibit belongs to a Syrian Child named Osama, in Germany
{Ca. 2011-2020}, displayed anonymously without further information.
The map is a visual display of its (or Osama’s) backstage journey, however, the anonymity of
display raised our uncertainty around the piece, whether it was done spontaneously by the
child, or under adult supervision, whether it was expressed out of neutrality or is there hidden
agendas embedded behind it. The viewer’s involvement here is questioning the curators
approach, rather the displayed item itself, which is the purpose of such a specialized
exhibition.
Within our field research, we captured an image of the item, built further analysis on the
communicated massage. We reached that, surprisingly, Osama (the child) had a better display
method for his experience than the curators. The anonymity of the display and the pre-settled
categorical system declined our receptacle analysis on the item, until it was taken out of the
display context. The display was misleading that even some of us (Master Students on a field
research mission) did not even notice the exhibited item at all.
As the discussed exhibit is a demonstration of a geographical journey, with a focal point on
the spatial aspect in correlation with fleeing obstacles, the suggested display method is to
present the communicated information as a scenery method, in a room-based experience with
spatial aspects that applied the kid’s visualization as a reference to guide the visitors, by
mapping his perceptions onto the exhibition space; 9 rooms, reflecting 9 journey steps. Each
room to include a digital display portal, playing archived video/audio materials that correlate
to the same estimated locations, and circumstances visualized on the map; Here the visitor’s
involvement will be oriented on formulating comparative analysis of what happened on
camera, and how a kid’s interpretation could conceptualize it. 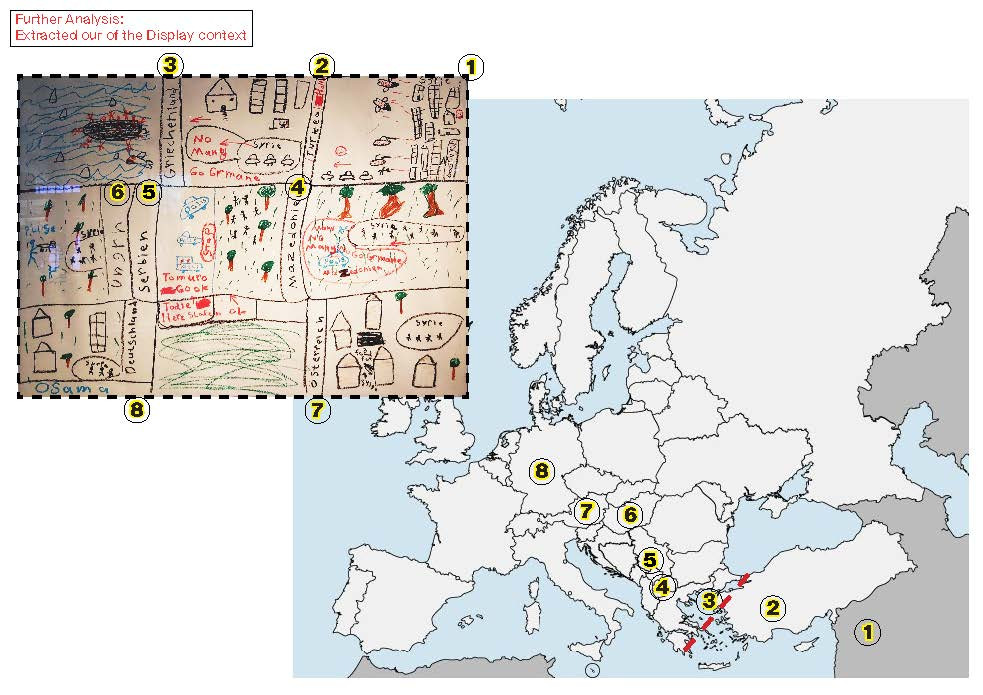 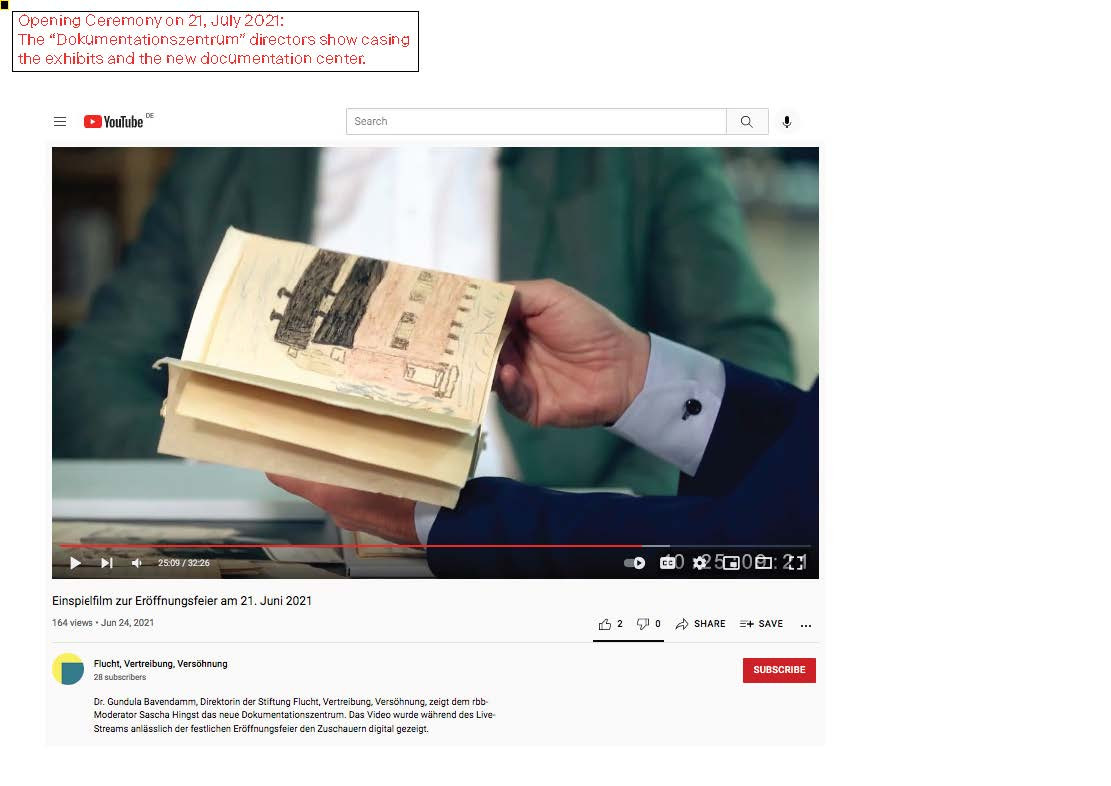 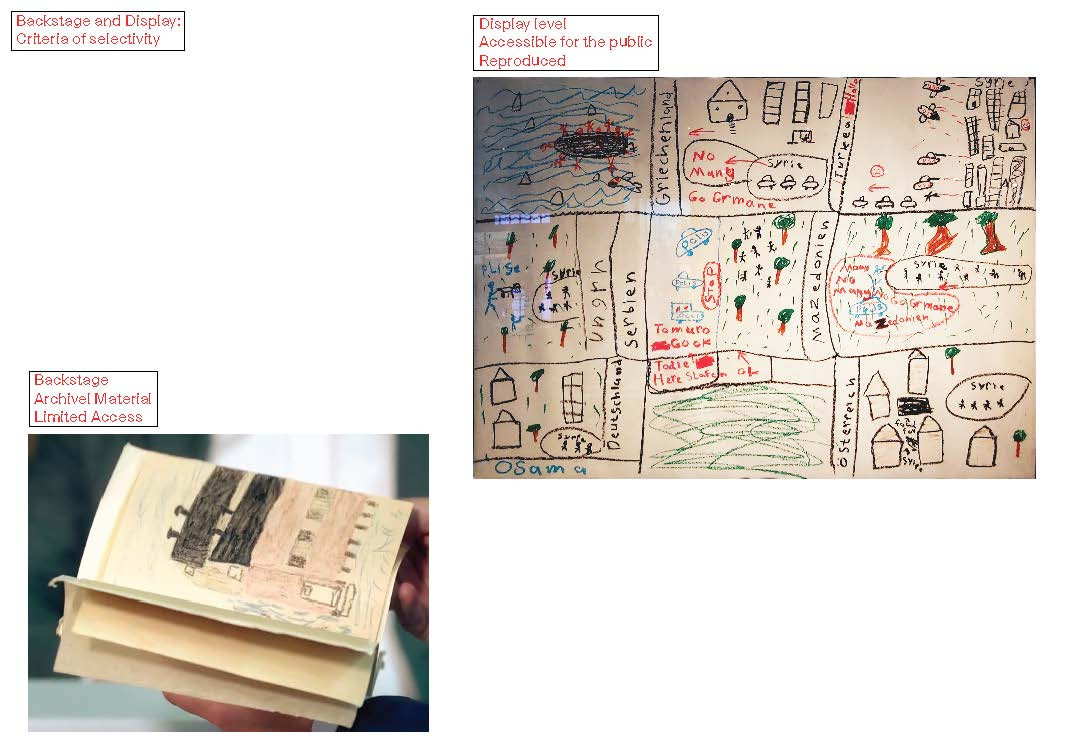 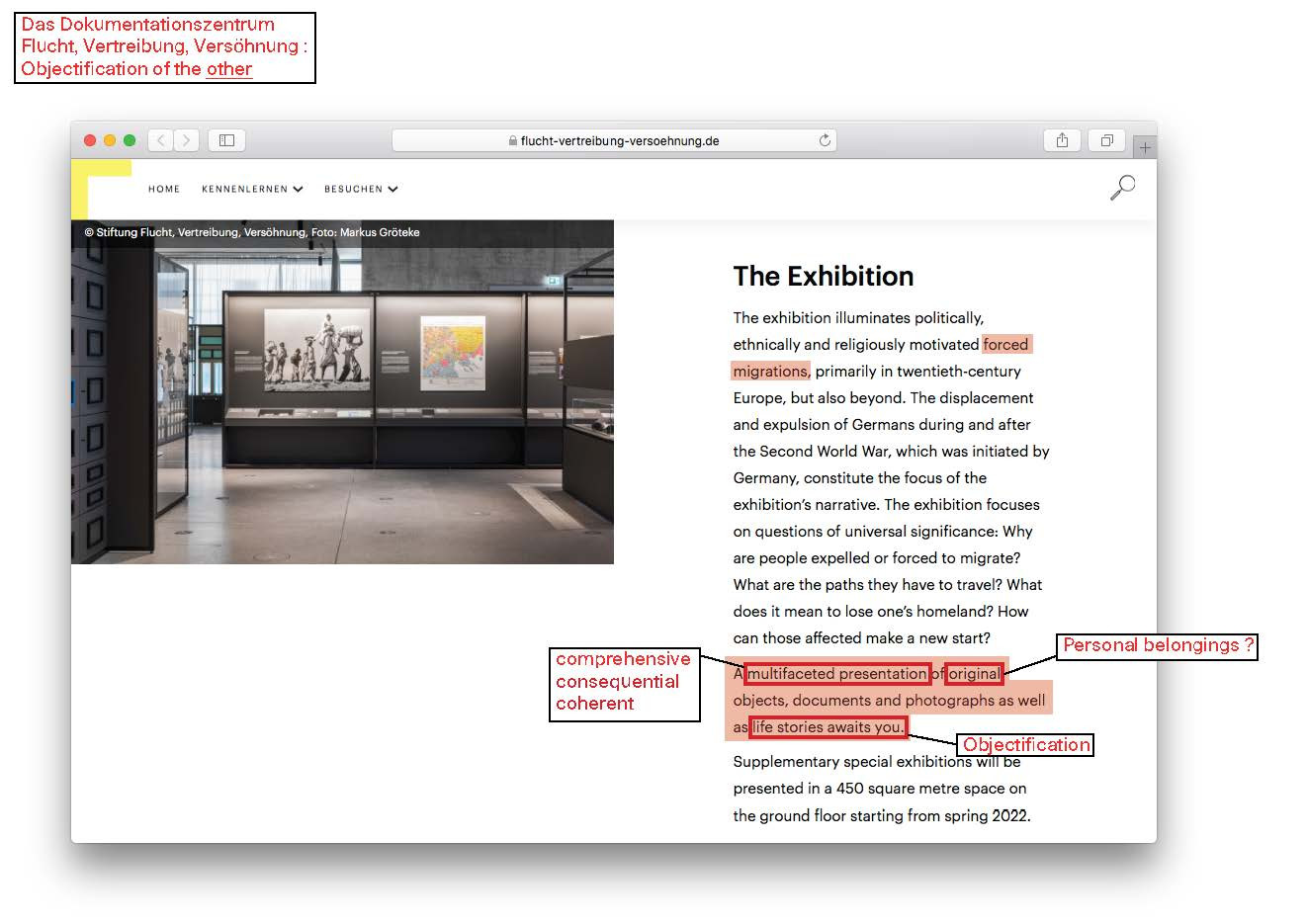 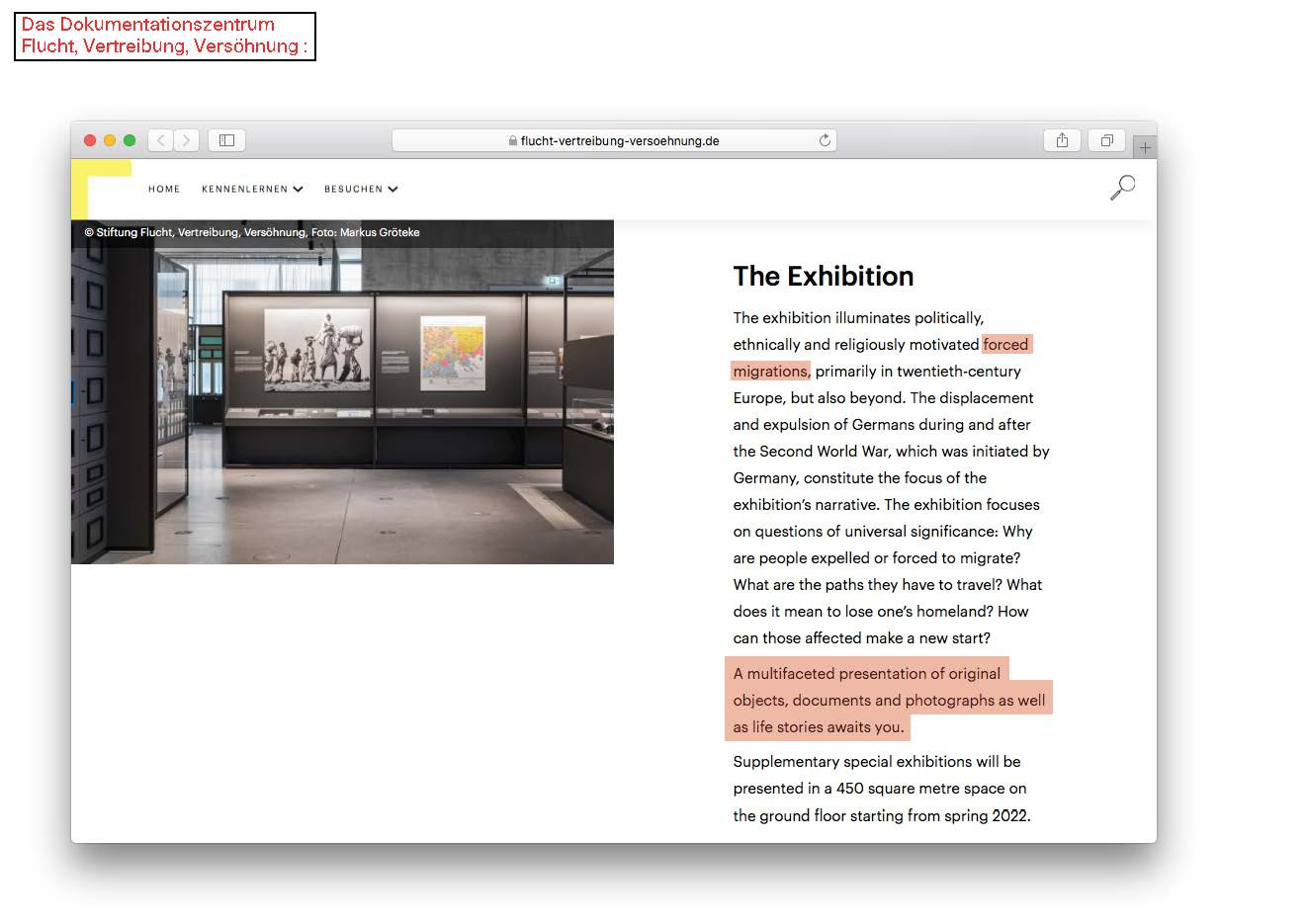 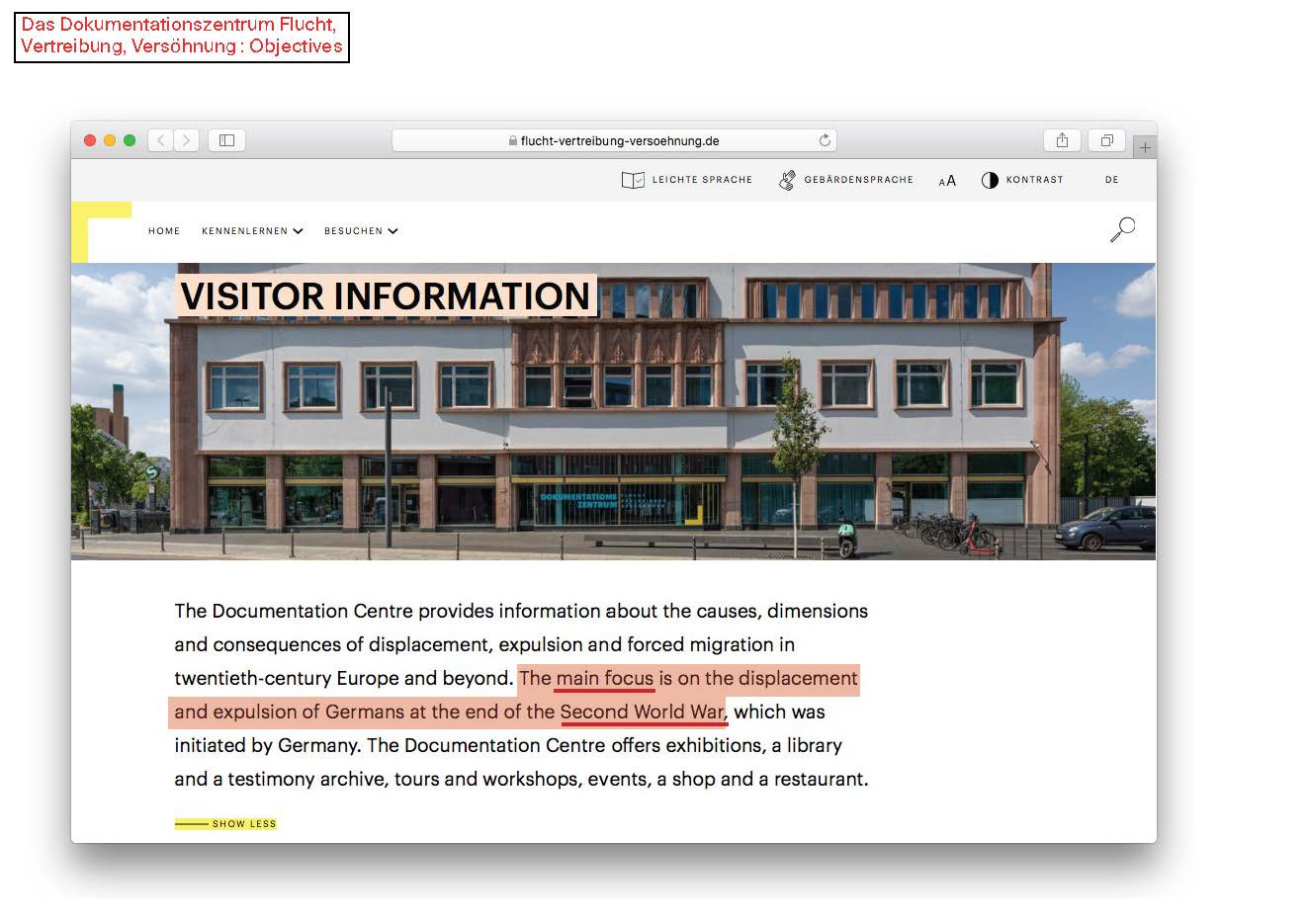 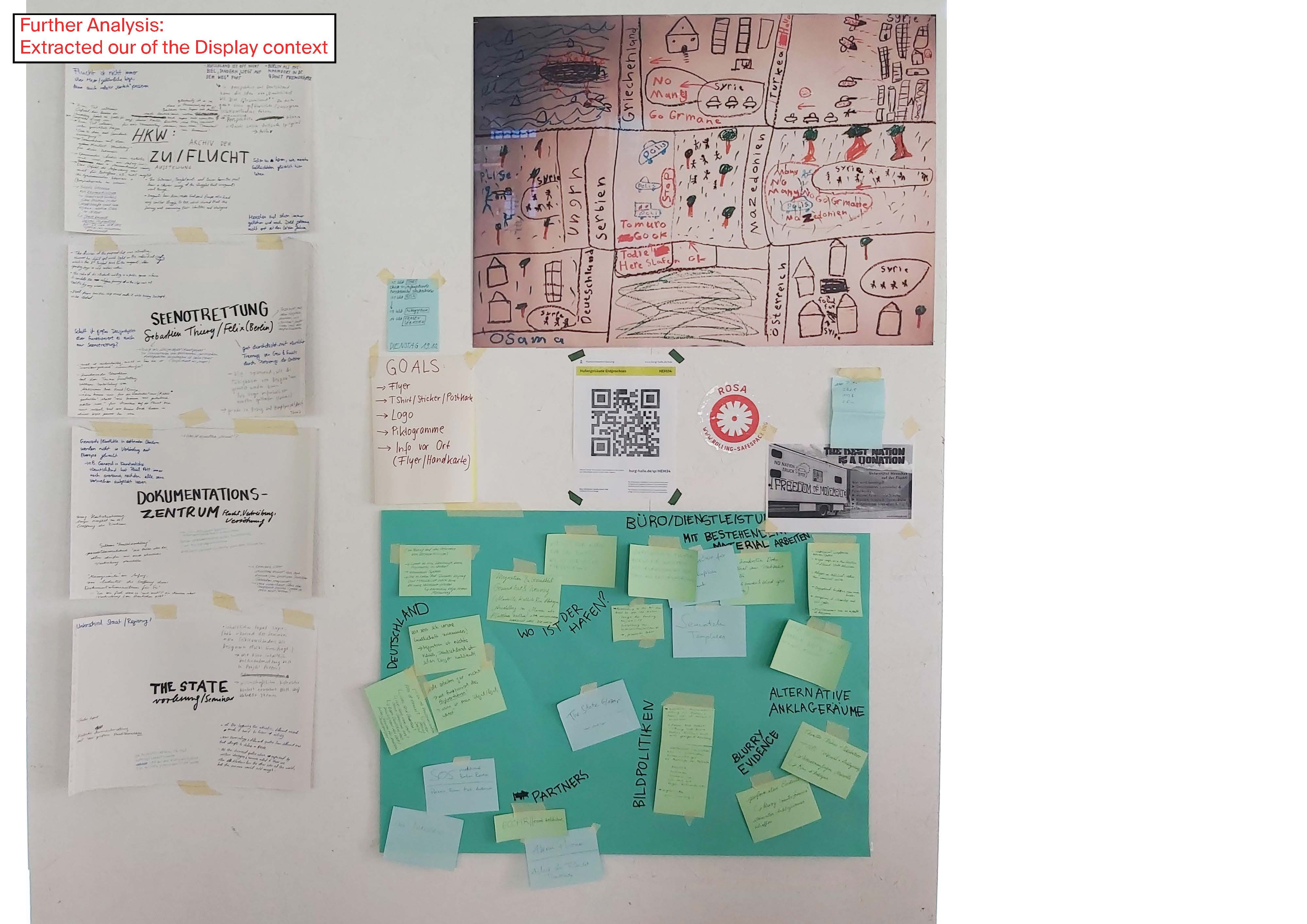 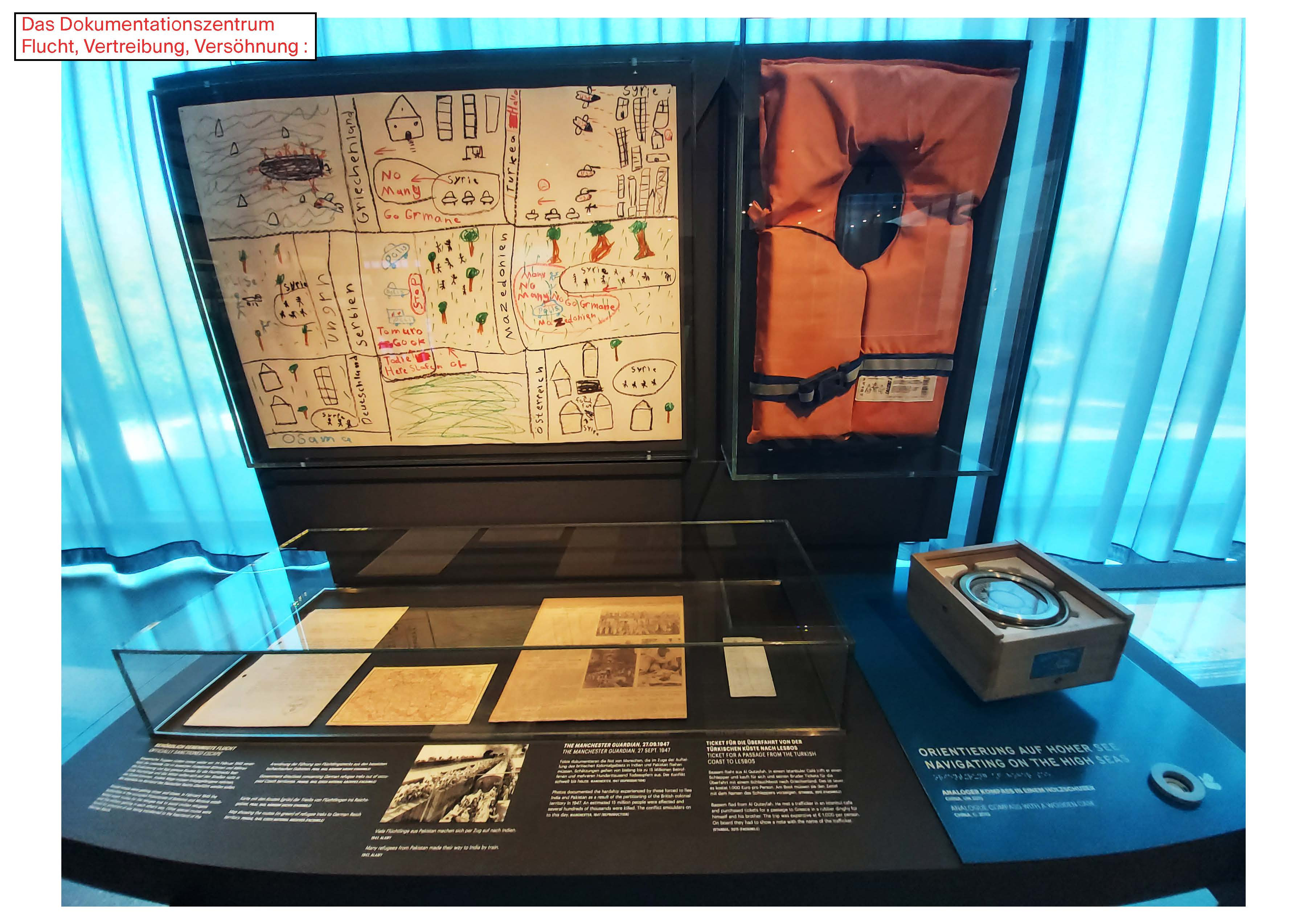 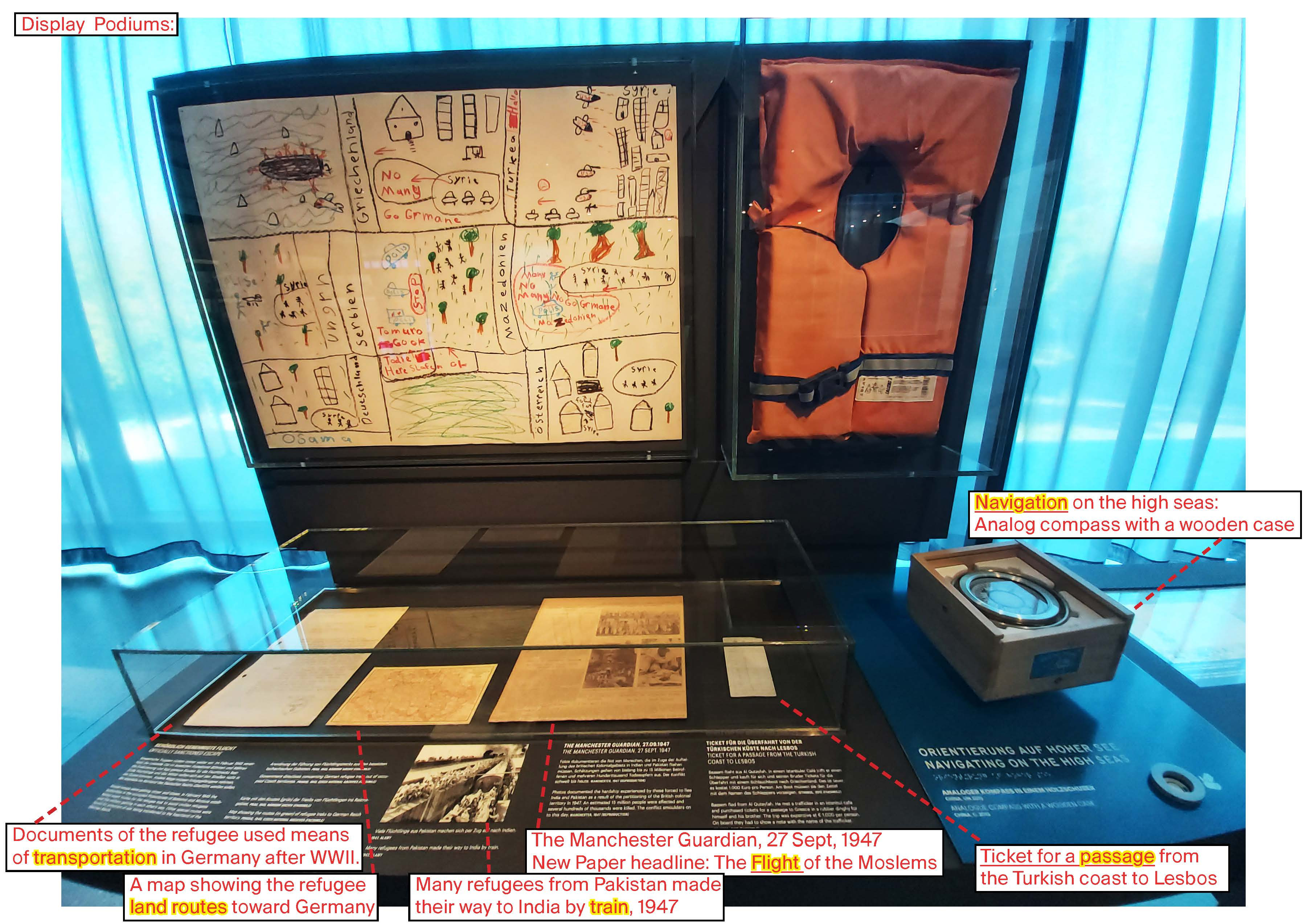 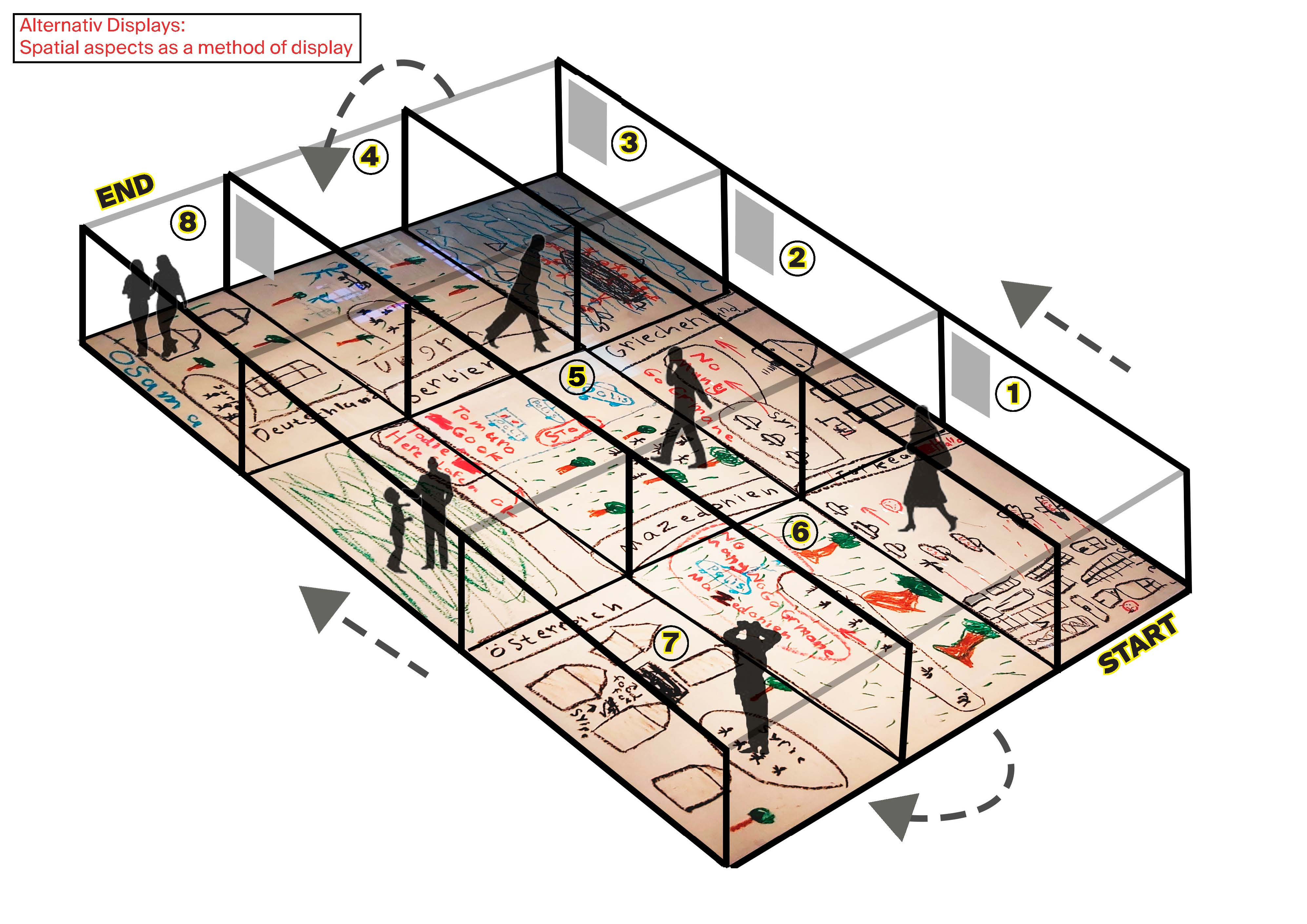 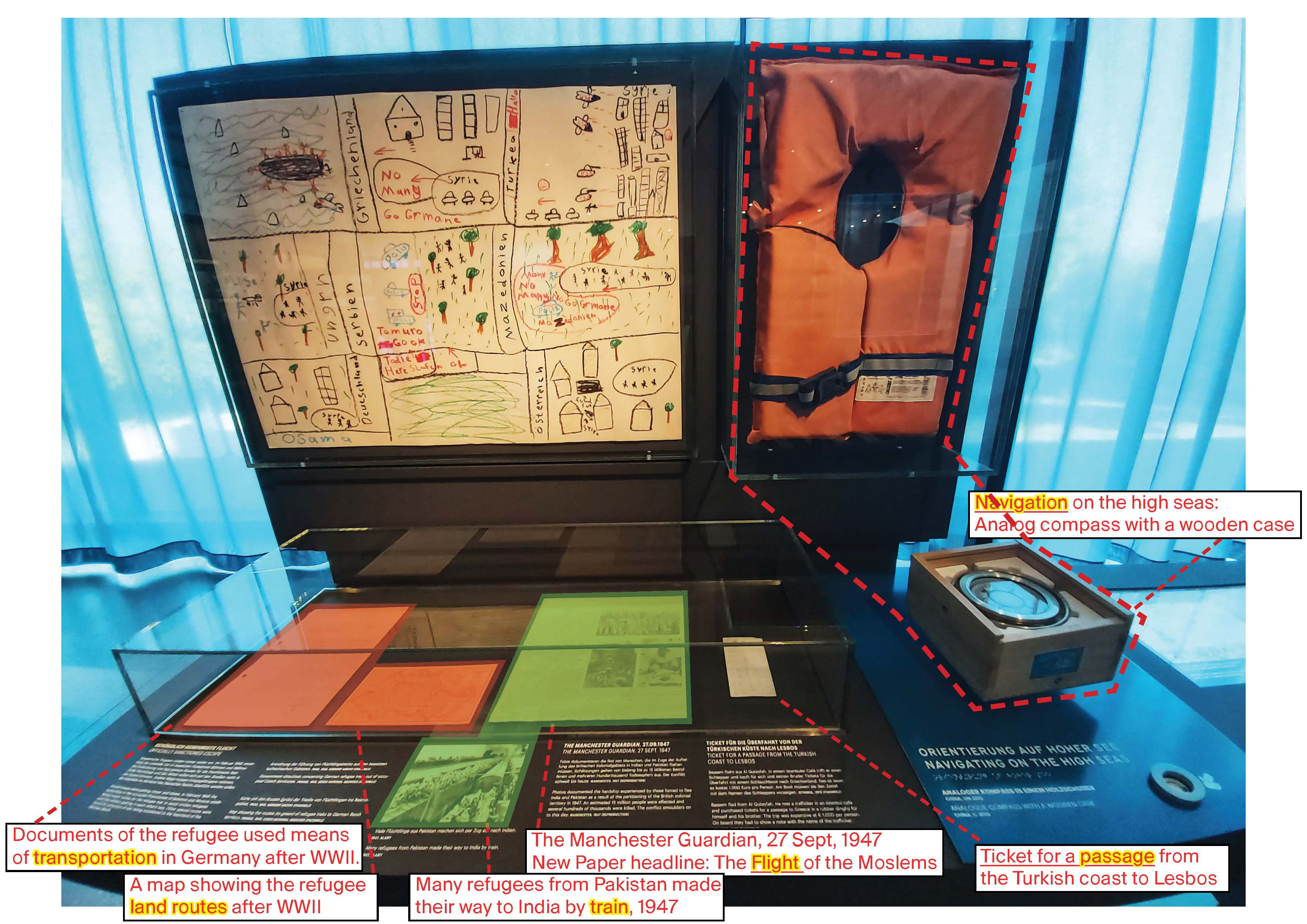 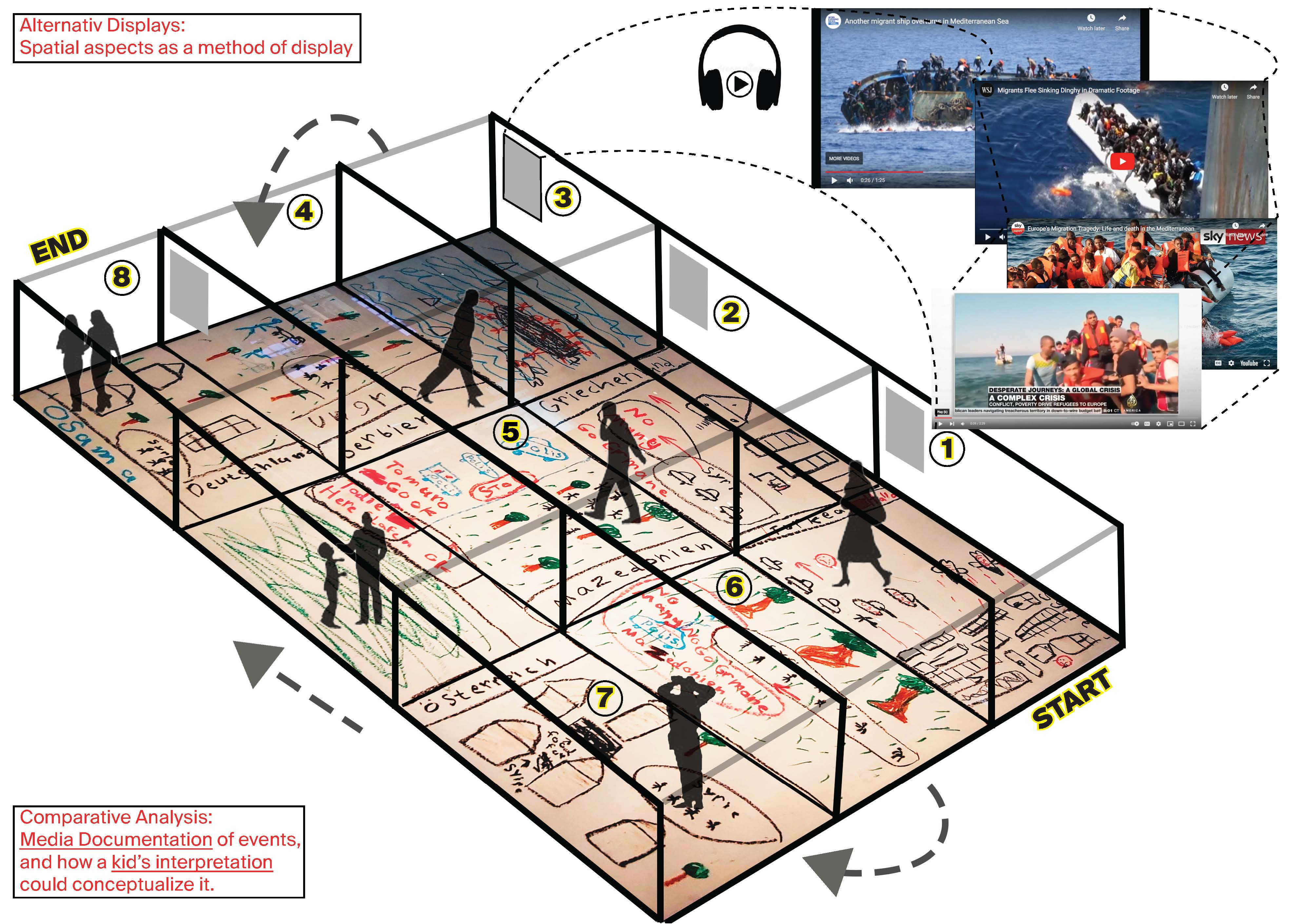